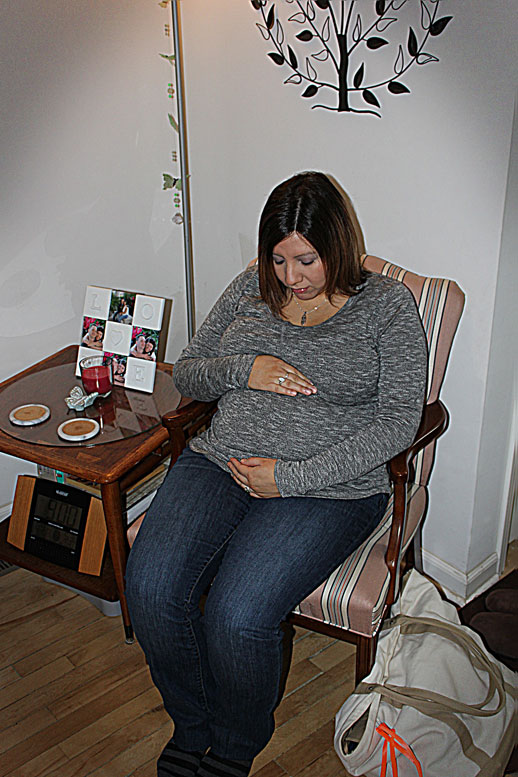 Julie’s first day in the hospital was a little bittersweet. As we left home to check her in for monitored bed rest, she took one last look around the house, realizing that the next time she will be home is after the babies are born. When she returns, the house will be completely different. The basement project I have been working on should finally be done. Some furniture that is cramped in the living room will be moved into the space created downstairs. The furniture in our current bedroom will be completely moved out and a nursery, freshly painted and decorated, will be taking shape in preparation for the triplets’ arrival. When she comes back, she will be recovering from her c-section in a house that might seem strange compared to her hospital room where she will (hopefully) be for quite a while.

We left the house, not knowing exactly what to expect. As Tom Barnard read the news on the KQ morning show, I laughed at the funny parts, hoping Julie would join in. I could tell she was nervous and already a bit homesick.

Once we checked in, it was a complete whirlwind. As we filed into a tiny room, a nurse told us we would hopefully have a larger room around noon as it became available. Julie changed into the hospital garb and climbed into bed.

I shuffled my way into the corner, hoping to stay out of the nurse’s way as she whirred around, placing audio monitors onto Julie’s belly and adjusting them continuously as she sought the heartbeats of each baby. It’s still great reassurance to hear the strong and regular rhythm.

The hospital staff took blood, swabs, readings and observations. Everyone was great to work with and friendly, but there was a lot of poking and prodding. With the IV tap in, the magnesium sulfate treatment was started. This made Julie feel very hot and she started to get a bit nauseous to the point medication was needed to help with that. An ice pack provided a little comfort for her too.

As everything was explained to us, one thing stuck in my head. Each day that Julie is in the hospital and pregnant reduces 9 days in the NICU (3 days per baby). That seems like such an incredible motivator, to think that each each week is worth 63 days less time the babies need to spend in the hospital! I knew Julie wasn’t looking forward to being stuck in the hospital for so long, but the sacrifice on her part would be worth it to help our kids when they are born.

As the day progressed, it was clear the larger room would not soon be available. I worked while Julie was occasionally monitored. After an extremely bland hospital food dinner, the bigger room was finally available! It was about 6:30 in the evening.

The “permanent” room is about twice as big. The view is not as nice, unless you like rooftop and brick wall views, but the space is worth it. I made trips back to the car for the rest of the belongings we packed for Julie’s stay. I believe it is about ¼ mile walk each time between the room and the car, so I probably got about a mile and half in that day.

The NICU doctor came in to our room and gave us a rundown of what to expect if our babies are born within the next two weeks. She told us how there would be a NICU team for each baby, about 8-10 people total just for our kids in addition to the other doctors and nurses in the room for the delivery. The babies would be immediately whisked away and we would be lucky to get a glimpse of them before they would be intubated, get a tube for feeding via their belly button and put into a Ziploc-like bag to preserve body heat. Without going into the details, I’ll say that at this point we would be most concerned about survival if they are born in the next couple weeks. Every couple weeks, the NICU doctor will give us an update what to expect, and each time the news becomes easier where, for example, the discussion is more about just needing a little oxygen instead of needing a breathing tube.

After the NICU doctor left, Julie had another round of monitoring the babies’ heartbeats. The little babies have so much room to squirm around, tracking them down can be challenging and time-consuming to verify an individual heartbeat to get simultaneous readings on all three. Just before the monitoring was over, Julie’s best friend arrived. I helped finalize all the arrangements Julie would need before I left to go back to the empty house.