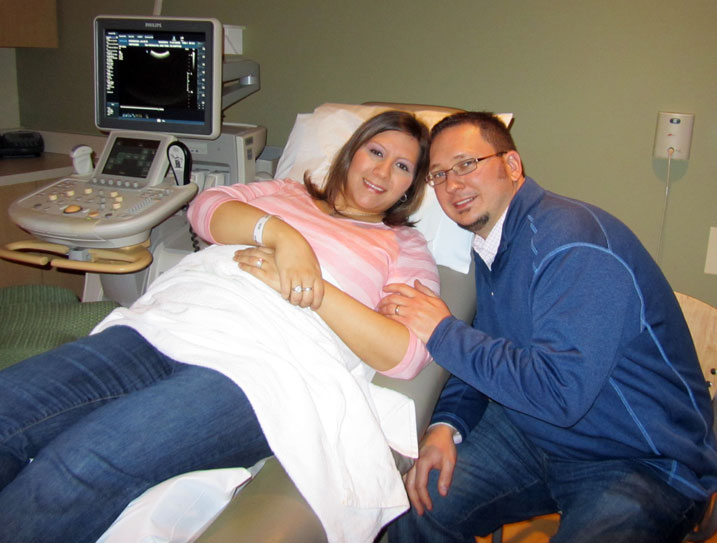 I just had the “Level 2” full anatomy ultrasound this last week. Going into it, I was a bit nervous. More than anything, I wanted to know that all three were still thriving and had strong heartbeats. Baby A has had us so worried with the lack of amniotic fluid and leaking that recurs occasionally. Still, we were excited for another chance to see the babies.

We weren’t sure what to expect, and if we would have to wait through each measurement before learning the gender of each baby. They quickly went through the positioning and identification of each, and then they went on to the gender determination.

Baby C: This one has the “penthouse” and has been measuring larger than A & B. With the positioning, the nurse was fairly quickly able to identify. A boy! She marked down “….Blue: on the ultrasound and printed the image.

Baby B: In the middle, Baby B needed a little bit of nudging to move into positon, but again we were able to see. The nurse said, “and this one…” and continued to type on the ultrasound screen “…..PINK.” A girl!

No matter what our babies were going to be, all boys, all girls or a mix; we knew that we would be happy to grow our family. Still, we were hoping we would be able to experience raising both boy(s) and girl(s). We were so thrilled that our wish is coming true.

Baby A: Fluid creates dark areas in the ultrasound, which helps the nurses and doctors to see contrast against the babies. With the amniotic fluid drained to less than could be measured, there was little contrast. Making matters more difficult, Baby A was in the pike position (legs extended with head by the knees) and not in a good position to determine the gender. From this ultrasound we could not see anything.

We knew that at 17 weeks they were able to determine genders for all three, but had not told us, so we asked the nurse to check if anyone had made a note in our charts about this. When the nurse returned at the end of the ultrasound, she had a small piece of paper, which she unfolded to reveal the handwritten note: “Triplet A – probable girl.” A girl! Well, at least “probably.” We’re not sure what level of confidence there was at 17 weeks, so it is possible that is not 100% accurate. For the time being, that is the best information we have so we are going to say that we are expecting two girls and a boy!

The rest of the ultrasound was mostly routine. However, there is one piece of great news: when they looked at Baby C, they found his stomach is now ‘normal’ size! One less worry, and we are so thankful that he won’t face multiple corrective surgeries for the stomach. Our prayers have been answered!

The doctor came into the room to go over the results with us. She said she “is pleased.” Baby C measures in the 52nd percentile, Baby A in the 23rd percentile, and Baby B in the 15th percentile. She explained that triplets do not have a separate percentile scale from singletons, but a 52nd percentile triplet is actually pretty large. Regarding the smaller size of A and B, she said that they are less concerned about smaller babies, as long as their growth has been consistent and they are healthy. They look healthy and measurements are all basically in line with their past measurements and growth rates.

We asked about Baby B being smaller than Baby A, wondering if that was perhaps because she had the single umbilical artery (SUA). The doctor said blood flow looked good, but with B she was more concerned about the umbilical cord attachment at the placenta. The cord is attached to the periphery of the placenta, which has less blood distribution. This could be a concern, so it sounds like they will keep an eye on this as well. I guess we trade one concern for another at this point.

I expressed my concern about Baby A and the lack of amniotic fluid. The doctor told us how amniotic fluid is not needed for much, and the lung development happens at some unknown critical point between 16 and 22 weeks. Since there was still measurable fluid until about 19 weeks, the doctor is hopeful that the critical lung development occurred before then. Unfortunately, there is no way to know for sure until the “breathe” test when they are born. Once I am hospitalized, I will receive a steroid shot that will help all babies’ lungs develop. We remain concerned yet hopeful at this point.

If we hadn’t already mentioned, Julie fits into the high-risk category for two reasons. Because she is over 35 years old, she is in the “advanced maternal age” category – which probably makes a bigger difference in terms of her eggs and the risks for genetic conditions. On top of that, triplets pregnancy is an obvious reason to also put her in the high risk category. The doctor has told her she will most likely fail the glucose test (an indicator of gestational diabetes) and it is certain the babies will be born no later than 36 weeks (40 weeks is full term). With all these risks comes the nice bonus that she will receive great care with close monitoring, which means more frequent ultrasounds.

I don’t know if you’ve ever seen a live fetal ultrasound or not, but to me it is a truly incredible sight. The early ultrasounds at the fertility clinic provide just a taste. Beyond just the chemical test results, pee sticks turning color and your wife missing her period, there’s just something about actually seeing something there. From the ultrasounds we had seen as part of the IUI and IVF process where Julie’s ovaries were being monitored, we had already learned a little bit about how to read the screen. Dark areas are fluid, white areas are tissue. We had a general map in our heads of where the uterus was in relation to the bladder or the ovaries. So at the first ultrasound after getting a positive reading, we knew the three dark blobs were something new.

The second ultrasound was particularly cool because it was a new machine and they brought in a new element: sound. For the first time, we not only learned we had triplets, but one at a time we heard each of their heartbeats for baby A, B and C. At about 160 beats per minute, it was music to my ears.

Each ultrasound reveals something new, and we look forward to it each time. At the first ultrasound at the perinatal specialist (11 weeks), we were able to see a lot of activity. Even though it was too early for Julie to feel the babies moving, they were kicking and squirming constantly. We could see their hearts beating more clearly this time.

Baby C always seemed to be a little bigger than Baby A or B, and this time was not different. The nurse referred to Baby C as “the moose” of the bunch. Baby C was enjoying “the penthouse” and had room to grow, while A and B looked like they were competing for space. As the nurse attempted to take measurements of Baby B, Baby A was kicking B in the head. Sibling rivalry begins early.

At the next ultrasound, arms and legs were easier to see. Babies were taking a much more “human” appearance, with the shape of the skull and eye sockets becoming more prominent as well. This time, Baby A was doing a headstand for us! I’m starting to think this one will be our little troublemaker.

Because A and B were measuring slightly smaller than Baby C, we asked more about this. The nurse explained that because the babies can be more curled up or stretched out, it is likely they are very close in size or the same size. As she discussed this, she was able to point this out on the screen and it made perfect sense. Before the end of the ultrasound, she also pointed out how organs were becoming visible, and we could even see the tiny dot of a stomach for each baby.

While having triplets means that we will most likely never go through the pregnancy experience again, we are very blessed to have the frequent ultrasounds. I think I enjoy it just as much as Julie, if not more, and I can’t imagine anyone wanting to pass up the opportunity.