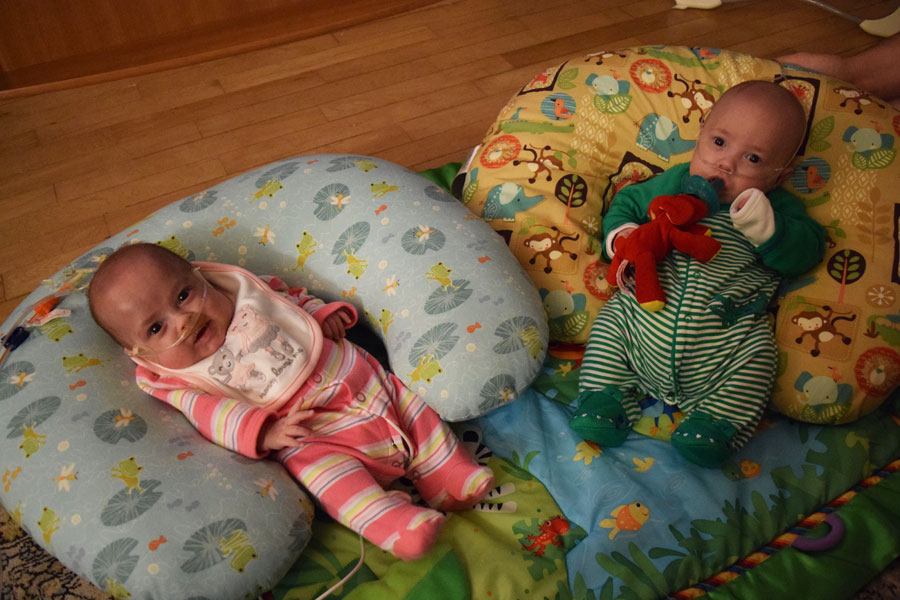 It felt like this day would never come: after 132 days Hazel came home on Thursday, September 25th! We have finally realized the dream of being together as a family and it’s truly amazing!

The road home took Hazel a little bit longer because of her feeding. When we tried bottle feeding her while she was in the NICU, she silently aspirated (meaning she doesn’t show any signs of choking). For a while, she was sick for unknown reasons until process of elimination and a swallow study revealed it was her silent aspiration. The speech therapists tried working with her to develop the suck/swallow/breathe coordination and made a little progress, but were not able to get her cleared to go home with bottle feeding. Hazel needed surgery to place a G-tube for feeding directly into her stomach. Rather than being inserted through the nose, as they do it in the NICU, this is a semi-permanent tube that literally sticks out of her stomach.

On September 15th, the surgery itself went well for Hazel. However, not long after being brought back from the OR, Hazel was extubated. I was out of the room getting lunch when this happened. As I came back to the room, Julie waved me to come over to her quickly. With tears and the look of fear in her eyes, she explained that Hazel was not taking her own breaths after being removed from the ventilator. I held Julie close as the staff tried to rouse Hazel. Eventually she began to breathe and her oxygen levels came back.

Afterwards, Julie told me more of her perspective, as she watched Hazel turn pale, then blue and purple and limp like a rag doll. Her oxygen saturation had plummeted. We normally get concerned when it gets below 80% and panicky when it gets below 70%. At one point Julie saw 18% on the monitor. She said that she was able to hear my heart pounding in my chest after I had gotten in the room and realized what was going on – something I never noticed or don’t remember.

The staff reassured us she was okay, and some preemies that have been intubated for a long time and are sleepy coming out of anesthesia are a little reluctant to start breathing again. After a few hours she was back to the very minimum amount of oxygen needs and doing well with breathing again. We were glad to have that episode behind us and have Hazel back.

So what is it like having both kids home? Well, it was nice to get accustomed to taking care of one baby when Grant came home. Getting used to two kids at the same time with medical needs is completely different. It takes planning to move kids around the house. They have tubes and oxygen tanks, and Hazel has a feeding tube with a pump on an IV pole. We have to be sure we are not tripping over all the tubing, that all parts are moving together, and try to do it when the other kid doesn’t need attention.

Hazel’s reflux is so bad, she sometimes vomits large amounts that can interfere with her breathing which is really scary. Less than 24 hours of being discharged from the hospital we switched her feeding from meal-like doses during the day to a 24/7 continuous drip and she seems to do better at keeping food down. Eventually she should outgrow this as her stomach muscles develop more and her esophagus gets longer.

Sleep is rare, as I’m sure it is with most new parents. However, we have a higher probability of losing sleep based on the number of kids with their medical needs and the equipment alarms. The oximeter alarm sounds like that really awful $5 alarm clock buzzer, especially through the small speaker on the baby monitor. The feeding pump has a beeping alarm like a small electronic kitchen timer. For some reason it does not pick up well on the baby monitor’s microphone so we overslept that a couple times. We now set alarms for the nighttime food refills. Formula only lasts 4 hours without refrigeration, so that is our schedule to wake up and refill, guaranteeing no more than a few hours of sleep at a time – assuming nobody cries to wake us up.

We already had a trip to the emergency room after noticing some green “stuff” around Hazel’s G-tube site. We were told to look for stuff like this as a sign of infection so we called her pediatrician’s 24/7 care line. At their recommendation, we packed up and headed in to the hospital ER in the wee hours of the night. Fortunately this was a false alarm, and the doctors were not concerned that it was infection.

So it might sound like I am complaining, but that’s just self-pity. I really can’t wait for the days when we can just pick them up and move them around without being attached to anything or worrying about causing them to vomit and choke. In the meantime, we still enjoy them so much. We are in wonder and amazement at our two little ones and we look forward to who they will become.