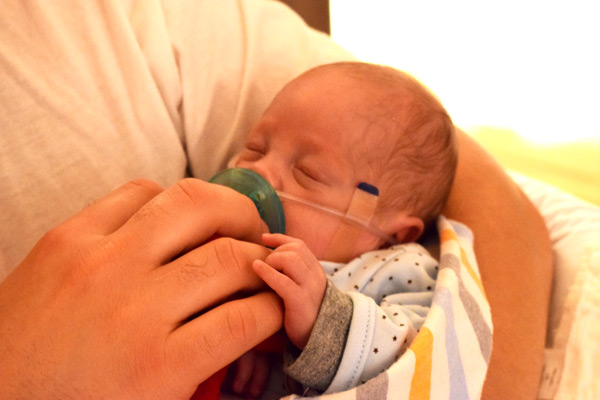 Hazel and Grant are now three months old! A lot has happened since our last update (Cribs). In general order of occurrence:

We found this bottle of Coke – remembering our angel Marissa.

Hazel moved from the ventilator to CPAP first. The staff predicted she would fail her first extubation. She proved them wrong.

Grant’s eye exam showed ROP (retinopathy of prematurity) Stage 3 with PLUS disease. ROP with PLUS is a potentially blinding condition that affects preemies. Higher risk factors include extreme prematurity, low birth weight, infections, and high oxygen support – all risk factors our kids have. Grant got shots of Avastin in his eyes to try to correct this. As of his most recent exam, the shots have been effective and his condition has regressed.

Both babies stopped caffeine and pain medications. Hazel switched to high-flow oxygen. She was not a big fan of the CPAP mask or prongs, and is much more comfortable now.

Grant was extubated to CPAP. This was his third time, but the first time where he had proper preparation with steroids and good stats at the get-go.

In a routine chest X-ray, the care team found a rib fracture on Grant that is healing. It is unknown when it was broken, but was not surprising given their tiny bones and the fact that the medications sometimes decreases their calcium and other important nutrients.
Our nurse practitioner at one point started calling our kids “The Boring Andersons” as they started to stabilize (boring is good when you are in the NICU). More recently, she said they should be upgraded to “The Amazing Andersons” because of all the great progress they had made.

Grant followed his sister in the switch to high-flow oxygen.

We held both babies at the same time! It became very apparent the size difference between Hazel and Grant.

They were both switched from “Critical Care” to the “Intermediate Care” team. Instead of focusing on trying to make very sick babies well, they are now focused on getting babies ready to get home. (There really isn’t a picture for this)
Moving Day! An area of the NICU was closed down due to “low census.” The kids were moved from the double-room “apartment” to two adjoining rooms just down the hall. After 90 days in the same room, it felt a little bit like home. (Five days later, census grew and we have moved back into our old room!)

…Grant was 1lb 9oz at birth – a little less than this pack of applesauce cups (including the packaging weight).

Coke, butter, applesauce…seems like food is on our mind. Speaking of which, next week they will introduce Hazel to bottle feeding. There are challenges associated with the coordination of swallowing and breathing at the same time, especially for babies who have been intubated for so long. Grant has to come down on his oxygen flow before he can try, but we’re hoping he is not far behind.