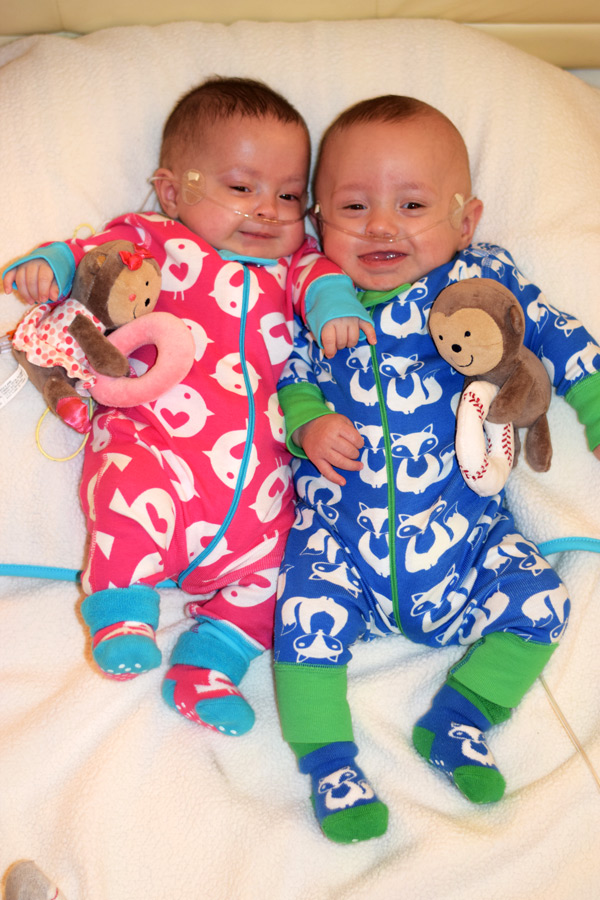 It has certainly been an incredible year. Last year at this time, we were just learning that Julie was pregnant. We didn’t yet know how many we were expecting, and we were elated. We called it our late Christmas present. This year, we were able to celebrate Christmas with our children two children on earth and one in heaven, and we are truly blessed.

Hazel and Grant continue to grow. They recently reached weight milestones of 11 and 13 pounds, respectively.  For seven months old, that is pretty small. For their adjusted age, Hazel is still pretty small and Grant is about average. We expect Hazel will always be on the petite side.

Hazel continues to battle with feeding. After three months, it was time to replace her G-tube. They have already replaced the J-tube portion, but this time it was to get a new “button” part that you see outside of the stomach. The old tube was looking like it was getting contaminated from when the J-tube part came out too much, so the timing seemed good with regard to that as well. We were pretty excited to get rid of the massive tangle of Popsicle stick (tongue depressor), tape, looped tubing and useless ports that comprised the old setup.

So we took her in for her surgery, nervous from our experience the last time she went under general anesthesia. After talking to the doctors, she is taken away by the nurse anesthetists. It is then that I realize we are waiting in Room 13 in the Orange section. I’m not very superstitious, but there is the notion that orange being a foreshadow in film and 13 being an unlucky number. Fortunately, everything went very well, and I even ran into a few familiar faces in the halls.

Since surgery, Hazel has been spitting up fairly frequently in large volumes. It is more like vomiting. We have been told to let her adjust to it for a while. I suspect the larger J-tube is not allowing her stomach acids a path to escape her stomach. She also seems to be irritated by the button at the stoma (site where it enters her stomach through the skin). It might be rubbing from minor rotations of the button as the tubes get jostled or gravity pulls down on them. While she may be free of the old Popsicle stick configuration, it seems she has traded for new issues to battle. I just hope she adjusts soon and feels better.

They both continue to do amazing things. Grant is smiling and cooing up a storm. We wish we knew what he’s saying to us. Sometimes while he’s eating he will pause, look right at one of us and we’ll see a huge grin behind the bottle. When we remove the bottle from his mouth he starts talking in “Grant language” and smiles and smiles. After a few minutes of this he’ll go back to eating. It’s so much fun to see him at this stage. Hazel too is smiling up a storm. She loves when we move her arms around like she’s dancing. She is just starting to coo and we hope that she will catch up to Grant shortly. We are just waiting for one of them to start laughing next. Hazel smiled before Grant…so who will be the 1st to laugh?

They are both reaching for things – toys, mobiles, people, etc. Hazel really loves music, especially singing. I find myself making up lyrics when I only know the tune to a song, or just making up songs altogether. It keeps her calm or entertained. Grant is more interested in rhythm – a typical boy. A little beat-boxing soothes him, and sometimes rapping the oxygen tank with the valve wrench gets his attention in a positive way. I joke that someday we might form a band together.

The great news is that Hazel passed her oxygen test (barely) and was able to come off the oxygen support right before Christmas! When she didn’t pass last month, Julie said, “maybe she will just in time for Christmas, wouldn’t that be a wonderful gift for us all – especially Hazel.” One less tube is a huge blessing and a big step toward “wireless” babies. Grant recently took his oxygen test. If he passes, he will be able to come down a notch, but not entirely off support yet. We are still waiting on results, but based on the fact that the machine did not alarm all night, we are feeling pretty good about it. We are very proud of them!

Christmas was a lot of fun. They are too young to understand everything about Christmas or even get excited about it in advance, but just the crinkle of wrapping paper, or the sounds and sights of the new toy that were wrapped inside were clearly entertaining to them. We enjoyed spending time as a family and seeing the looks on their faces.

Yes, 2014 was a great year in which we welcomed our three children into the world after so many years of waiting for them. We’ve enjoyed getting to know them so far. Yet the year has been full of pain and sorrow as well. So with that, we look forward to 2015. We hope to see Hazel and Grant continue to thrive and grow, become independent of feeding tubes and oxygen, eliminate their medications, and amaze us with the new things they learn and do. We hope everyone will be there to cheer them on and share as their journey continues.

Merry Christmas and Happy New Year to everyone!