Hazel has a sneezing fit:

Grant being held by Julie:

Last time we posted to the blog, Grant had been moved from the ventilator to the SIPAP. He was doing very well for his first trial. Without having the normal preparation of a planned extubation (with steroid shots a couple days in advance), he held on for about ten hours. He was still oxygenating well and had a good blood gas, but he was starting to work too hard to breathe. Rather than letting him tucker out and having to intubate him in an emergency move, the care team decided to reintubate him while he was ahead. They tell us that even those short times off the ventilator are good for them, and we are very proud of what he did.

Our babies are now growing up so fast! As mentioned in previous posts, it is often the simple and mundane that gives us a sense of joy and relief. For two months, our kids have truly lived in a bubble. Their Plexiglas isolette (sometimes referred to as an incubator) has been their home in a dark room with no windows. They only left their isolettes briefly for events like Hazel’s PDA surgery, Kangaroo care, and to switch to a clean isolette exactly like the last one. As of last Thursday, they made the move to cribs!

I remember telling someone the news, who seemed unimpressed. Well, I’m sure for full term babies it is no big deal, but to put it in perspective: they moved into cribs exactly 7 weeks prior to full term. They really shouldn’t even be in this world breathing air yet, so I am going to be proud of our kids on that move!

Moving to the crib also means we were able to dress them in real baby clothes! I know Julie has been looking forward to this for a long time. We had to unbury the outfits that we had washed and neatly folded into storage bins, thinking they would not get to wear them until they came home.

On Saturday, they were stable enough that we were able to do Kangaroo care with both at the same time! For the first time ever, we were able to get a family photo with all of us visible in a single shot.

On Sunday, we were able to give them their first baths. They had already gotten sponge baths, but we were able to put them in a little tub and get them all cleaned up. They both tolerated it extremely well, and Grant only fussed when we were putting on his clothes. Once they were all cleaned up, I looked at them a little differently. I couldn’t see the breathing tubes, leads and monitors. Being bundled up in clothes, I felt like we were just spending time with our new babies who had never been so sick or born so early.

Hazel is showing progress on her oxygen needs, so the doctors have given her steroids to prep for a trial extubation later this week. Grant, on the other hand, was not willing to wait. He threw up and his breathing tube was getting pulled out. He was extubated to CPAP for a little bit, but his oxygen needs were at 100%. Not long after, he was reintubated and is holding fairly well.

So, to answer some frequently asked questions:

How much do they weigh? Are they gaining weight?

Yes, they are growing, but their weight fluctuates. Some medications can cause a little fluid retention, and added fluids (like IV or blood transfusions) can increase their weight artificially. When they retain too much fluid, they may get a diuretic as the extra fluid makes it more difficult for them to breathe. At one of the most recent weighings, Hazel just hit the 3lb mark and Grant reached 4.5 lbs (over 2 kilos).

When do they come home?

It’s odd to think that Grant has already surpassed the minimum weight to come home, but weight is not everything. They still have other developmental goals to reach, namely breathing and eating. The general guideline has been their due date, but they will do it at their own pace. In fact, it is most probable they will come home at different times. 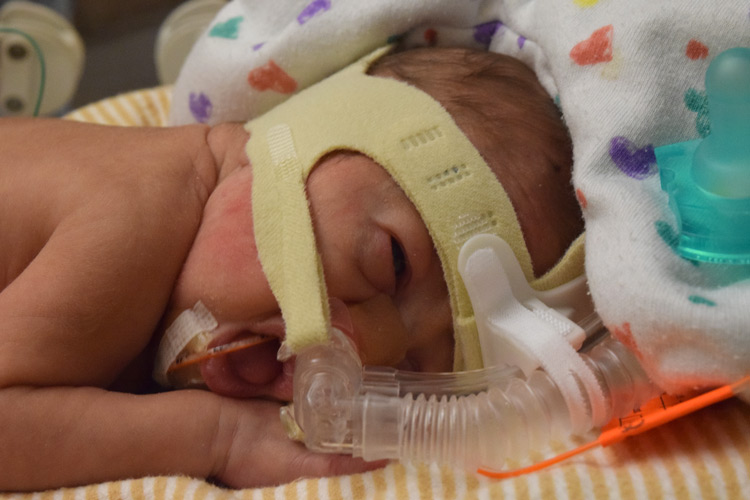 We realize it has been a while since we last posted. Life has just been so terribly busy lately. Here’s the rundown of what’s been happening.

Hazel has been recovering nicely since her PDA surgery. She had some ups and downs on her oxygen needs at first. A follow-up ultrasound of her heart shows no issues with the closure they did on her ductus, and blood is all flowing in the proper direction. Since then she has been stable enough that we have both been fortunate enough to do some kangaroo care with her during this time.

Grant has had a few more milestones. His oxygen needs were pretty high, in the 70% range. At some point, the care team decided that he was trying enough breaths and it might be worth trying to move him from the high frequency oscillating ventilator to the conventional ventilator like Hazel is on. Grant handled it magnificently and we were able to hold him again! Grant had not been held in over six weeks! The high frequency ventilators have a really stiff tube that makes it too difficult to hold the babies while they are on them. We were glad to take advantage of the chance to hold him. He has grown so much since we last held him, it was like holding a completely different baby.

At this point, both kids have at least doubled their weight since birth. Grant weighs 3 pounds, 5 ounces and Hazel weighs 2 pounds, 5 ounces. The weights shift a bit from day to day, as transfusions, blood draws, feedings, medications and infections can all affect the fluid they retain and obscure their real weight gains from growth.

Not long after Grant switched ventilators, he was having challenges with getting all the air he needs from the vent. As the babies grow, the space between their windpipe and the endotracheal tube (ET tube) gets bigger and causes air to leak. Grant’s leak was getting big to the point where they were fighting just to keep his lungs inflated against all the air loss. One option is to put in a larger ET tube, but the other is to try to move him off the ventilator to a CPAP or SIPAP. In case you aren’t familiar with either, a CPAP creates a constant air pressure and a SIPAP creates waves of higher pressure much like breaths, neither of which needs a breathing tube but instead connect to the nose with a headgear. In either case, the baby is doing the breathing with just a little aid of pressure to keep the lungs expanded.

Well, the care team made the choice to move him to the SIPAP and so far (he has only been on the machine for a few hours) he has been doing great and his blood gas labs show he is getting respectable numbers. We have been told that most kids fail their first time eventually, but every minute and hour helps to train the breathing and develop their lungs. We’re hopeful he will do very well, even if he does have to step back to a ventilator, and we are totally thrilled to see this progress. The best part is, for the first time ever, we were able to hear Grant cry! We never thought we would want to hear a baby cry and be happy with it, but it was such a wonderful sound.

A few weeks ago, they discovered a fungus in one of Grant’s blood cultures and started an antifungal treatment. He has not had a positive culture since the initial finding and will be finishing his antifungal treatment tomorrow, which means his PICC line (peripherally inserted central catheter) can be removed after that. The PICC lines are a convenient way to administer medication and fluids, but they are also prone to infection, so it is a good thing to have removed when possible.

We are looking forward to further progress for both. Hazel is probably not far behind, but her nose is still just too tiny for the mask and they want her to be bigger and stronger before they make the CPAP/SIPAP transition for her.

We feel so very fortunate with all the progress the babies have made. We know they still have a long path ahead of them, and their outcomes are yet to be determined in the long term. For now we are living in the moment and are so proud of Hazel and Grant and will enjoy holding them and watching them grow!