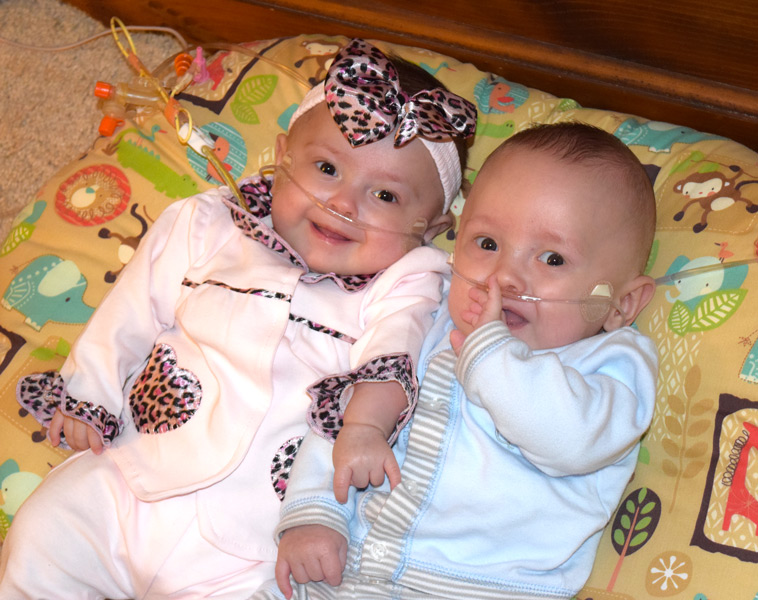 Thanksgiving has already come and gone in the blink of an eye. We have so much to be thankful for this year. We have written hundreds of thank you notes and are counting our blessings.

It’s been nearly two months since we last updated the blog. It certainly hasn’t been because nothing has happened! We are still getting used to routines and balancing a very busy life with two babies with medical needs. We have gotten so far behind, we are still in the process of writing thank you notes from the summer!

In our last blog entry, we commented on Hazel’s frequent spitting-up episodes. Even after switching to a continuous feed method, we saw only marginal improvement. At our follow-up visit with the GI doctor, she recommended we convert to a J-tube for feeding. The G-tube she had went directly into her stomach for feeding, where the G-tube is a narrower tube that goes through the stomach and into the small intestine. It actually retrofits inside of the G-tube that was in place, so no sedation or cutting was needed – just some time under the x-ray as the tube was fed in.

Hazel was perfectly calm and mostly slept through the whole thing. They nurse commented she was the easiest baby she had seen for this. Since the J-Tube conversion, the number of spit-up episodes greatly decreased, and the volume each time was significantly reduced as well. The tube is bit more frustrating because it can get kinked and clogged more easily, and it is taped to a popsicle stick as if it was some amateur’s duct tape job. It is hard to believe with all the advanced medicine used during the kids’ NICU stay that this was the solution. It gets in the way ALL THE TIME.

About five weeks later, Hazel started spitting up large amounts frequently again. She was also spitting up formula and vitamins, which we would expect to have bypassed her stomach with the J-Tube. After inspecting, it looked like the J-tube had slipped out quite a bit, so Julie made a trip into the ER with Hazel. Eight hours later, her J-tube had been replaced (with yet another taped popsicle stick). Her tube had come out about 4 ½ inches, so food was going into her stomach instead of small intestine.

The kids got to meet their dog, Hope! Hope has been away with family since Julie went on bed rest, and we have missed her dearly. With the oxygen tubes and Hazel’s feeding tube, we are concerned she might either accidentally snag a tube or proactively try to chew on it, and we haven’t had much time to watch over her and the kids. The introduction went really well. Hope was really interested in both kids, but didn’t seem to be pushy to jump on them. We really look forward to when the kids are older and can play with her.

Grant’s ROP began to progress a bit, and he had to have laser eye surgery to cut back the blood vessels that were growing irregularly. The eye doctor said the surgery was successful, and at his first follow-up visit, things are looking good. He is still not totally in the clear and will need regular follow-up until he is 70 weeks adjusted age.

Hazel’s eyes have developed normally, and she is no longer at risk for ROP! She will still need to see a pediatric opthomologist to screen other eye conditions, but we are happy we at least don’t have to worry about ROP.

Hazel and Grant dressed up for Halloween!

Hazel had an oximetry study to see if we could take her off the oxygen. I was so hopeful she would pass her test. Having one less tube connected to her – and not having to haul the tank around when we move her – would make things more comfortable for her and so much easier for us. After staying up all night to record each time the oximetry alarm sounded (it was 47 times) she unfortunately did not pass and needs to stay on the oxygen and retest in December.

Hazel and Grant had their first Thanksgiving and got to go on their first trip that was not a doctor or ER visit! They got to go to Grandma’s house and Auntie’s house. Packing up all the baby gear, plus the oxygen tanks, IV pole and feeding equipment is a real chore, but it is great to get out of the house for a bit.

Hazel and Grant are starting to smile more. We can almost predictably get Hazel to smile by touching her nose like a button.

Grant is getting physical therapy for his foot. His left leg muscles are very tense, and his left foot doesn’t seem to have as good of circulation as the right foot, so we want to keep it loose and limber. We are hoping this doesn’t affect his strength and balance later when he tries to walk.

Those are the big events for the month. Per requests, here are some “extra” photos of the kids: